Next up is a man who has been working with us in various capacities since our second film – Red Scare. He’s been an actor, a director, a DP, and an AC. He is Sami Saad. 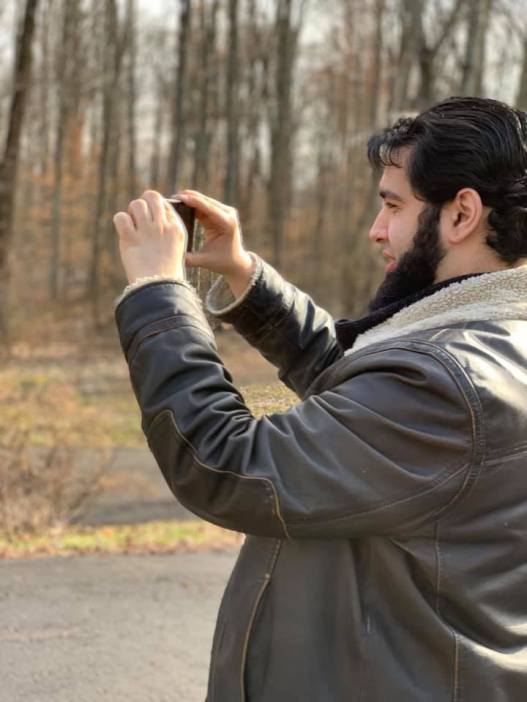 Tell the world a little about yourself.

First and foremost I’m a Muslim. My faith is faaaar from perfect but whenever I’m asked to describe myself Muslim always is the most important descriptor for me and whenever I dont know what to do in my life my first thought in figuring it out is “How can I be a good Muslim about this?”. Second I’m a big brother. My sister is single handedly the most important person in my life and without her support and love idk that I could do half of what I do let alone chase my dreams. Third, I’m a big ol geek. I love movies, anime, videogames, comics etc. The influence of the media I consume has touched my life in a positive way and I’m in this field to do that for others.

You came onto NBF as a zombie in Red Scare, returned as an extra in Cabin of Errors, and then really came on board with Yellow Scare. Since then, you have been a director, AC, and DP on various projects. Which role do you like best? Which do you like least?

The most important thing to me is making stories come to life. My goal is to direct more. However because of my inexperience, my first time directing left a lot to be desired. So with regard to Narrow Bridge projects, Directing has been both my favorite and least favorite experience. Generally speaking I do love DP work. It’s fun and exciting for me to make things look interesting and tell stories through the visuals. AC work is honest work but it’s more technical and hands on than it is creative so not much to say there for me. I enjoy it as well but my goal is to do more directing and DP’ing.

What is your favorite NBF memory?

It might be a cheesey answer but my whole experience on set for yellow scare was really eye opening for me. Ive done a lot of less than ideal film work. but yellow scare set the bar for how to shoot something great with great people. the enitre shoot was a blast and that experience is how i compare new shoot experiences. The Director and Dp took every moment they could to teach me something new, the crew was so fun and easy to work with, and our actors were immensely talented and kindhearted.

You have mainly focused on behind the camera work with us lately? Do you have any desire to act in things? Write things?

Well It’s kind of an unrelated career goal to become a voice actor. Since I was a kid I would love to make and perform a wide variety of voices. It also would excite me when I learned what voice actors played who in the different shows and video games I enjoyed. Whether I was playing with my action figures, joking with friends, or DMing a D&D campaign, I loved being able to embody another personality as best as I can. I’ve had a few acting classes and would love to further my skills so yes I would love to act more!
Writing is something I’m alot less experienced with but I do want to tell my own stories. It’s just not something I’m focused on now because my work life and personal projects take up a lot of my time.

What are your career goals as a filmmaker?

When It comes to what I like to watch, I prefer series and shows over movies. Something episodic gives us as the audience the chance to grow with the characters as opposed to the 2 hours we may get for a movie. My goal is to create a show that people love and resonate with.
Something I’ve always wanted that would, to me, be a sign of success, is to have a show get recognized and popular and then be invited to conventions on a panel to get to speak about it. Meeting people that have been an important part of my life because of my work has always been something that really touched my heart and I wanna be able to do that for others.

You have other groups and projects you are a part of… UTK, Bit Boys, Unshakeable Productions… Tell us a little about them. Also, what the hell does UTK stand for?

Unshakeable Productions is a film production company that was birthed between my self and Issa Musharbash. I worked as an in house videographer for his real estate company, Provident Legacy Real Estate Services. We were really picking up speed for the company and wanted to provide the same service for others. Thus unshakeable productions came to light. With Duda Penteado,  brilliant Brazilian fine artist, coming on as director, we’ve produced an award winning documentary in our first year of operation.

BitBoys is a YouTube channel that Doug Spuma and I started. we spent alot of time together on the set of yellow scare and were excited to finally work on another project together. BitBoys is a video game let’s play channel where we hang out, joke around and play video games. Doug edits and uploads the videos and really keeps the channel afloat. I really look up to him when it comes to his work ethic and passion. I animated our intro for our videos as well as designed the thumbnails and channel art. Our beloved goofy friend and third bit boy Frank Mayhack created the original bitboys theme song and out of that experience he went on to create his own chiptune album System Glitch. Ever since, bitboys has been uploading gameplay videos every week and we’re not stopping anytime soon. Check us out at YouTube.com/bitboys

Finally U.T.K. Productions. These are my ride or dies, my best friends, my brothers. I’ve known the UTK boys for over 10 years, we’re practically family. We recognize what a blessing and rarity it is to have the loving, close knit friend group that we have. Because of this and because of the ridiculous jokes and fun we have when we’re together, we wanted to share that with anyone that wants to be part of it. UTK productions is a youtube channel and instagram thats all about hanging with us and jokin around. We do comedy skits and vlogs. Be a member of the crew by subscribing to YouTube.com/utkproductions or www.utkproductions.com  you can also follow us @utk_productions on insta.

What does UTK stand for? Thats for us to know but maybe if you guess right we’ll tell you 😉 leave a comment on any of our vids or pics telling us what you think it stands for. We love acronyms!

I have never seen such a good natured person on a film set before. I know that I am not that good natured. How do you do it? Has it ever been hard for you to maintain that halo of decency?

I’m so honored that you think so well of me. Thank you. I think you’re very good natured otherwise you wouldn’t care that I’m good natured right? lol. Well as I mentioned at the beginning of the interview whenever I’m stuck my first thought is “how can i be a good muslim about this?”. I have to credit my faith first. I love for others what I love for myself. I genuinely care about others feelings and I try not to act without that in mind.
I’m also very blessed to have nothing but supportive good people in my life such as my family, utk , bitboys, and narrow bridge. It’s alot easier to care when youre cared for so thank you for that.
This might sound weird to some but another reason i try to be as good as i can is because of the shows video games and anime I love so much. The heroes I watched made me want to be a hero too. And maybe I don’t run around in spandex ( more because I don’t have the abs n pecs for it than anything else) but I want to be a positive force for others.

It can be hard. sometimes I do lose composure but I hate when i do. I put a lot of pressure on myself. I’ll fill my head with anxiety of not being enough or letting those i love down and that’s something I really need to work on. but as long as I’m working with good people like you I’m not too worried.