Next up is NBF’s Head of Production Design, Maglinda (Maggie) Perez, a title that she earned from helping with set dressing Cabin of Errors in one scene to co-Production Designing Yellow Scare to become our first head of that department.

Give our readers a breakdown of how you want from an actress in Lost and Found to the Head Production Designer of NBF. And tell them a little about yourself.

Well I have to say when I look back at where started and where I am today, I still am in shock. Ha! When I started out as an actress in Lost and Found, I was on the journey of just saying yes to different opportunities, opportunities that were outside my comfort zone. Kinda like Jim Carrey’s “Yes Man” but just not as drastic.

From there the yes’s continued, Sam had asked me to read the narration of “Yellow Scare” just to help out. He then informed me that I would also have a small role in the movie as well, which I thought was pretty cool!

Now, during that time, I was also volunteering at my daughter’s community theater. I had offered to lend a hand in painting the sets for her shows, but instead they made me their set designer. I guess Sam noticed and asked me to try out in creating a world for Yellow Scare as well!

Believe it or not, I was originally shot down as a production designer, since I didn’t have experience in film, but later I was given a shot to help and shadow Steve Defendini. From there is where I learned more about film making.

You are an art student currently. How does your art background play into your work as a Production Designer?

I finally earned my Bachelors after 9yrs. YES!!!!

Well, I had previously earned my Associates in Graphic Arts and planned on earning my Bachelors but during that time I had changed my mind numerous times. I had gone from Graphic Arts to Business back to Graphic Arts, and then finally Fine Arts and Crafts. Within in that time I was able to learn new skills such as print relief, life drawing, and sculpting.  It was hard for me to decide what I wanted to get a degree in since I was exposed to so much and wanted to do it all. Fortunate for me, I am able to take everything that I have learned and apply it into many different aspects of production design. Designing and prop-making is not just one form of art but a layering of different techniques.

What is your favorite part of being a PD?

If I must choose what my favorite part of being a production designer, I would have to say that being able to see my vision come to life. Often times I am so wrapped up in getting all the props together, moving furniture, and putting everything in place that I just don’t see it, but when I FINALLY get a chance to take a step back and see it come to life and the actors are now transported into this world, all the excitement rushes in. It makes the many late nights worth it.

My least favorite part? That’s a hard question. I would have to say the lack of time on my end. I work full time and raise my daughter on my own. Everything that I do is during my off hours and late into the night. If we had more hours in the day, that would be an ideal situation. On set and getting my hands into my craft is a passion of mine. I love every minute of it. Exhaustion and hunger breaks up the time that I have to work, but other than that, I love it. WAIT! I just remembered what I dislike, or should I say HATE. I hate hot glue gun burns. They are the worst, and if it hits the wrong parts of your fingers, it makes working painful.

How do you create so much on a shoestring budget? What tips can you give PD’s just starting out?

Working on a shoestring budget is not fun but you figure out ways to get what you need and want when desperate enough. HA! Here are some tips of mine: 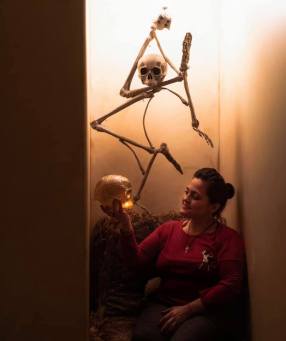 You’ve been a PD for a WWII comedy, a short horror film set in the modern day, and a Horror comedy… What was your favorite thing you created? What are you most proud of?

All the films I’ve worked on I am really proud of. Yellow Scare was my first and that introduced me into this world of film and everything that goes with it, and so I’ll always have a love for it, but I was a newbie and still learning the ropes. Don’t get me wrong, every project will introduce me into something new and will rattle my nerves and insecurities, which is exciting.

My favorite thing that I have created out of everything was when I was able to make Isaac bleed out [in Click Send]. I am not that knowledgeable in SFX. I have a lot that I need to learn. This short film allowed me to try something new. I did my research and tried it on myself several times. I had blood all over myself, my clothes, my floor and even one of my chairs. I had only one shot to get this right. So when it came time for filming I prayed to whatever god to let this work, and well you can see the outcome on Click Send [available to stream or buy on Amazon Prime].

What I am most proud of is Monster Mash. That whole production was created by me. I spent many late nights sculpting props, melting plastic into skulls, making paper flowers with my mother and I was able to display my sculptures that I created in my classes. I was exhausted but it was that moment where I took a step back and said HOLY SHIT this looks amazing!!!

What type(s) of Films would you like to PD? Any dream jobs?

If I could travel back in time, my dream job would be to work on a film like The Greatest Showman. I LOOOOOOVE that movie. I have a thing for music, musicals, Broadway set design and movie design. I would love to work on a huge film where all of that is incorporated into one. Maybe The Greatest Showman on Broadway?! Maybe?! FINGERS CROSSED! Maybe get a chance to work with Hugh Jackman. I don’t know where my career will end up but I do know that the sky is the limit and if my world can change for the better in the past 3 years can you just imagine what the next 3 years can look like???? I’m excited for that ride!