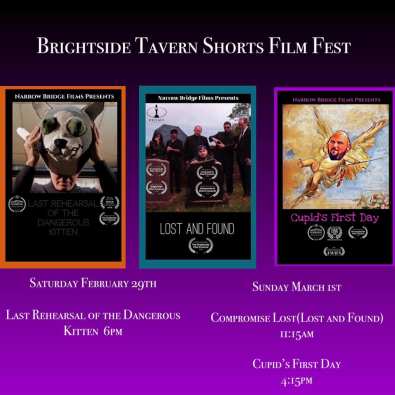 This weekend is the WINTER 2020 BRIGHTSIDE TAVERN SHORTS FILM FEST at the Brightside Tavern in Jersey City, NJ.

Narrow Bridge has THREE films in the festival.

On Saturday, February 29th, Last Rehearsal of the Dangerous Kitten will screen at 6pm.

BONUS: Our friend, first time writer/director Jayleen S. Perez’s short film Karmen is screening at 11:30am on Sunday, March 1st and is nominated for BEST DIRECTOR -DRAMA; BEST SUPPORTING ACTRESS (Alexandra Faye Sadeghian – making her NBF debut in the opening segment of our horror anthology); and BEST SUPPORTING ACTOR (some newcomer named Hashtag Daniel Michael Gregory – maybe we can get him in a NBF project one day).

SO. Come on out to the Brightside Tavern. Have a few drinks. Grab a bite to eat. Watch some movies. Etc.