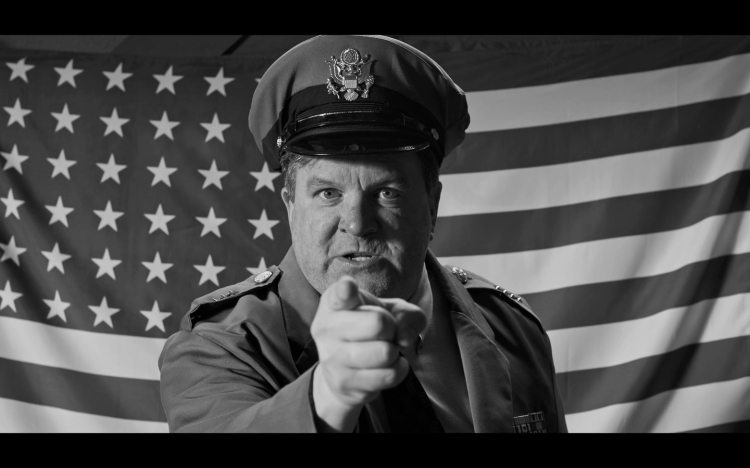 In 2010, I created a character called “Rex Steel” for a small scene in my first movie “Blaming George Romero.” He appeared briefly in a film within a film. Shortly before the test screening for that movie, my brother Isaac said that we should create a small teaser trailer for the film that Rex was in. We did. After that, I feverishly worked on a script that linked the scenes in the trailer together, and suggested that we film ANOTHER movie less than a year after our first.

“Red Scare” managed to improve on our first film in nearly every way. We won awards in Las Vegas & Honolulu and got more film festival attention than our first film. It was a great experience, and one of the most fun film experiences I have ever had. After returning from Las Vegas, I had an idea to work with these characters again… A prequel set during WWII. I had the general shape of the script in mind: the characters, the beginning, and the end. But I wasn’t able to get the script out of my head.

Then, in 2014, I did it. I somehow managed to crack the script and got a first draft and then a second… And then a third… And so on and so on… And it became the most ambitious project Narrow Bridge had ever attempted. New characters were added, new actors brought in to play them. New songs! A crew formed. And somehow, after a very intense shooting schedule, we completed production on the film in late May of 2016.

We’ve been in post-production ever since. As I type this, Joey Mosca (the head of the Narrow Bridge Audio Department) is finalizing the details of the audio of the movie. The movie looks and sounds phenomenal. I am so insanely proud of the work everyone did on this movie.

And on Wednesday, October 25th, you will get a chance to see what I am talking about as we will be having a test screening of the film at Frank Theatres in Bayonne, NJ. The doors will open to the public at 7pm. You will enter to the acoustic stylings of local artist Max Arias Jr. Following a very brief introduction, you will see trailers for our upcoming projects, a short horror film called “In the Blood,” and then the test screening of “Yellow Scare.” Afterwards, we will conduct a raffle for movie memorabilia and props from the film, and have a Q&A with the cast and crew.

Tickets can be purchased here: https://www.eventbrite.com/e/yellow-scare-test-screening-tickets-37949425754

A ticket includes a seat at the test screening, a souvenir program, and one raffle ticket. Please get yours as soon as possible. There is no guarantee that tickets will be available at the door. If there are tickets available, we will sell them, but if we sell out beforehand, that will be it. All ticket sales go towards the rental of the space, and the “Yellow Scare Film Festival Fund” to help us enter as many film festivals as we can.

It would mean a lot to me if you would be there at this very special test screening.